This card game information site’s goal is to offer a complete guide to playing card game rules of all kinds, especially how to play commercial and proprietary card games.

Most card game information sites online focus almost exclusively on gambling-related card games, like this site about playing online blackjack for money. That’s because gambling-related advertising is very lucrative from an advertising perspective. And even those card game guides that don’t focus largely on gambling card games focus on card game rules for games that use traditional decks of cards. Even a site that reviews online poker sites can be lucrative. Our site is different. We do provide information about traditional card games and gambling card games, but we’re more interested in writing about commercial card games (or “proprietary deck card games”). 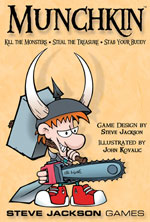 Munchkin, a Commercial Card Game for example, Magic the Gathering has new cards becoming available all the time. These cards are collected. But Munchkin comes with a single deck of cards that are specific to that game. There are multiple Munchkin-related games, and they can be combined, but they don’t sell individual cards as collectible items.

We’ve decided to focus more on being a proprietary card game guide because that’s our primary area of interest. We love card games of all kinds, but we have a special fondness for some of the more unusual invented games, with their colorful cards and special rulebooks.

Playing Traditional Card Games”Traditional” card games are those that are played with a standard deck of cards, which has 52 cards, and are divided into the following:

Four suits with thirteen cards of each suit. The suits include hearts, diamonds, clubs, and spades.

The thirteen cards are ranked. Numbered cards range from one (the ace) to ten. Then there are face cards: jacks, queens, and kings.

Most decks include a joker or two. The joker is only used rarely.

Some card games call for the removal of certain cards in order to create a special deck, while other card games require more than 52 cards. In those games, decks are combined to create a large deck.

Cutting the deck is one way that players try to avoid cheating by card mechanics. The deck is “cut” in half (divided into two stacks) by a player other than the dealer, then placed on top of each other to further randomize the deck.

There are multiple ways of shuffling a deck of cards, but some means of randomizing the cards in the deck is used in almost every game of cards imaginable.

Most card games require a dealer to distribute cards to the players at the table. This is called dealing, and the cards that a player in the game gets are called “hands”.

Card games are divided into multiple types, and there are various schemes for categorizing card games. Some of these include:

These are games where you goal is to form various combinations of cards. An example of a combination card game is Canasta.

This site is obviously a work in progress and will be for a long time. The number of card games we could write about here is just so vast that it will probably never be finished. But one way we prioritize which topics we write about first here i

The History Of Playing Cards

Playing cards is a famous pastime that people from all corners of the world enjoy, but how did it all get started? Well, as far back as the 9th century, the Tang Dynasty started off with the game of cards, by using woodblock printing technology, which made enough room for the preparation of 30 cards. The reason why the game of cards has been traceable up to this point is that the Tang Dynasty writer, Su E, made documentation of what was then called the ‘leaf game,’ in his text, Collection of Miscellanea at Duyang.

However, William Henry Wilkinson presented another dimension to the game of cards. From his findings, he discovered that the game of cards was doubling up as a game as well as a means of trading. In this case, the cards were used as monies, which means there were chances to place stakes when necessary.

Around the 11th century and 15th century, the game of cards spread across Northern Africa, Asian countries and some parts of Europe and is now enjoyed worldwide.

Now that we’ve pointed out a brief history of card playing, let’s highlight the benefits of playing card games.

•    Card games can help improve your judgment and statistical calculation.

•    It can help to strengthen bonds between families.

•    Card games can be enjoyed by people of all ages.

Playing Cards Online versus In Real-Life

Playing card games with real-life people in the flesh is a wonderful activity but for those times when you have the urge to play but no one to play with, online gaming platforms can be a solution. Here are some of the differences between playing card games online and versus in person.

Firstly, online card games are faster paced, compared to live games, when played. The rate at which cards are dealt is a lot faster. So you can play and stake your games without wasting time.

Secondly, it is easier to call an online card game than it is when playing live. It is customary for players on the losing side to call a game and making a call on a live game is quite tough, but calling a game online is way easier, saving you time and embarrassment.

Thirdly, the uniformity of rules when playing on online platforms is far better than live play. You’ll waste a lot less time arguing over game rules while playing online.

On a final note, if you have not tried playing cards online, you should definitely give it a try. This way, you can save a lot of time, get on the game quickly, and reorganize your strategy. After all, you have different options to work with while playing online.