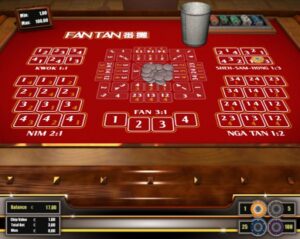 Fan Tan, also called “Dominoes”, is that rarest of popular card games that involves no bidding or trick taking. Fan Tan may also be familiar to you from other card games — it is included as an individual round of that French monstrosity of a card game known as Barbu.

Fan Tan is an easy game to learn, an easy game to play, and a winner can be determined in ten or twenty minutes. This makes Fan Tan an ideal party game, a game for playing with children, or just a distraction from the task at hand. I remember playing Fan Tan while working backstage at an opera house — Fan Tan is a great game to play if you’ve got four players and a little time to kill.

The Object of Fan Tan

The object of Fan Tan is to get rid of all of the cards in your hand. How do you do that? Read on and find out.

Fan Tan requires no special deck — just a standard playing card deck minus the Jokers. Poor Jokers — they hardly ever get used.

Since the game of Fan Tan is so basic, the back and forth of laying cards down and scoring can be mastered in a handful of minutes. In fact, I usually “teach” Fan Tan by throwing people into a live game and letting them work the rules out on their own.

The object of Fan Tan is to play all the cards in your hand one at a time — against cards laid onto the table by the other players. The first player to “go out” and get rid of their cards is the winner.

Once a player becomes more comfortable with the basics of the game of Fan Tan, however, that player is quick to figure out that there IS strategy in Fan Tan, and the intricacies of the game stand out. Fan Tan is really a game about planning ahead and strategizing, not just about the luck of the draw. If you’re good at keeping track of other people’s behavior and motives, you’ll be a master at Fan Tan.

First, determine a dealer by cutting the deck. Once a dealer is established, deal out the entire deck of 52 cards clockwise , beginning with the player to the dealer’s left.

Players should form their cards into hands and try to keep them concealed from the other players.

The first card to be played must be a Seven. The suit of the first Seven does not matter for gameplay.

If the first player to play holds more than one Seven, he should choose one and place it face up in the center of the table. If the first player doesn’t hold a Seven, he can’t play. The penalty in Fan Tan for having no card to play during one’s turn is simply losing a chance to play and being that much farther from “going out”.

Each player takes a turn playing a card from his hand on top of or below the cards previously played, and as the game progresses, the cards will form a Domino like shape.

If you have extremely high or low cards (for example, Kings and Queens or Aces and Twos) along with the seven of that same suit, it is a really good idea to play the Seven early so that there is time later in the game to build towards your high or low extreme. Misplaying Sevens can ruin your game of Fan Tan — even something as simple as playing one Seven incorrectly.

Avoid playing what are called the “controlling” cards in a game (such as Sixes, Sevens, and Eights) for as long as you can possibly hold out. Why? By not playing the Eight, you can temporarily prevent your opponents from playing their higher cards they’re holding.

Whenever it is possible to do so, make plays that minimize the number of play options that your opponents will have. This is basic Dominoes strategy, and the game of Fan Tan isn’t referred to as Dominoes for nothing.

Groups of cards in order (also called runs or straights) are the ideal combination of cards in Fan Tan. For example, if you have the four through ten of a particular suit, you could play the cards in just such a way as to keep your opponents from playing any cards for quite a long time while you drop one card after another. This is just another form of card trapping, much like the previous two strategy notes.

Whenever it is possible, get those Aces and Kings on the table — your opponents can’t play on them, meanwhile you’re on the road to “going out”.