President is a great party game. The object of President (which has many very colorful alternate names) is to get rid of all your cards, leaving one player holding cards in his hand — this player is then “The Bum” or “The Jerk” or “The Beggar” or “The _____”. Insert your own favorite slang term to make fun of the last player left standing. 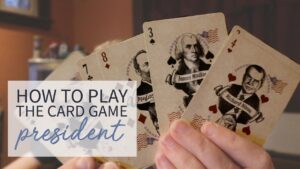 Ideally, President should be played with anywhere from four to seven people using a standard 52 card pack without the Jokers. The suits of the cards don’t matter in most variations of President, and the cards rank from highest to lowest in a peculiar manner — Twos are high, then Aces down through Three, which is the lowest. The rank of cards looks like this — 2 A K Q J 10 9 8 7 6 5 4 3.

The game play moves clockwise from the dealer. Determine a dealer by cutting the deck or some other means. All of the 52 cards are dealt out so that each player has a hefty stack of cards. Some players may have one card more than the others. Various house rules allow this player to “go first” or to tell someone else at the table to get him a drink, or something along these lines. After all, it is just one card.

The player to the dealer’s left starts the game by leading any single card or group of cards with an equal rank. The cards are played face up so everyone can see — this is crucial. Each player must then play along in turn — they can either pass or play a card or set of cards which “beats” the previous play.

A set of cards can ONLY be beaten by a higher set containing the same number of cards. So for example if the previous player played three sixes you can only beat this set with three Sevens, or three Aces, but not with a single card , and not with a group of four. If you have four cards to play to make a “beat”, you can always keep the extras to use later.

There is some strategy to this game — playing a winning set every hand isn’t necessary, and you can always pass.

The game play continues as many times around the table as necessary or until someone makes a play which everyone else passes. In that case, all the cards that have been played are turned face down and put to one side, and the player who played last (and played highest) in the previous “trick” starts game play again by leading any card or set of equal cards.

When a player whose turn it is to play has no more cards left to play, the turn passes to the next player in rotation.

The first player who is out of cards is awarded the highest rank for that game — generally, this is “President”. The next player to go out is the Vice President, the next is the Citizen and on down until you get to the last player. The last player to hold any cards in his hand becomes the Scum or whatever term of abuse you prefer.

You can alter game play by keeping score — in a scored version of “President”, the players earn points depending on their final position after rounds of the game. For example — you can assign two points for the President, one point for the Vice President, and no points or even negative points for the others. The game of President is much more fun if you’re playing with a group of friends and the players of higher rank have a bit of fun at the “lower status” player’s expense. There are “drinking game” versions of President in which the President gets to dole out drinks to other players, etc. Not that this website or its owners encourage drinking — but I found it necessary to report on a popular game variant.

Traditionally, the lowest ranked player (“the scum” or “the jerk”) has to do all the hard work — shuffling, dealing and clearing away the cards when necessary, as well as szerving the other players food and drink, etc. The game is less about the card game play (which is easy to learn and mostly based in luck) and more about the social interaction.

Here are some other popular variations on President:

Some people include Jokers for play — when this is instituted, a single Joker beats any set of lower cards.

Many house rules include other “high cards” that can beat a Two — such as Jack of Diamonds or any black Threes.

Any pair of aces or below can be beaten by a single two, jack or joker.

Any three of a kind of aces or below can be beaten by a pair of twos, or by a single jack or joker.

Any four of a kind of aces or below can be beaten by three twos, two jacks or a single joker.
These numbers of cards are all doubled if playing with two decks.