“Oh Hell!” is one of the more polite names of this game. In college, we called it “Oh ____” (insert your own naughty word), while at my grandparent’s house it was called “Oh Darn!” Adapt the name to your own needs — it isn’t important. Heck, in parts of China they call this game “German Bridge”. What’s in a name?

Anywhere from 3 to 7 people can play Oh Hell, although in my experience the game is best when it is played with four to six players.

A standard deck of 52 cards is used, with the cards in each suit ranking from high to low — Aces high, deuces low.

In traditional Oh Hell (that’s a weird way to start a sentence) each hand after the first is played with one card fewer, all the way down to a hand of just one card each. Then you turn the other way, and start adding a card per hand back up whatever level you started at.

The Object of Oh Hell!

The object of Oh Hell is to bid the number of tricks you think you can “win” from each hand. Unlike other bidding games, in Oh Hell you MUST take only the number that you bid, no more no less. Points are awarded only for making the bid exactly — if you earn less or more tricks than you bid, you will lose points.

The catch of Oh hell is that, based on the number of cards dealt out and the number of players, at least one player will fail miserably each hand. 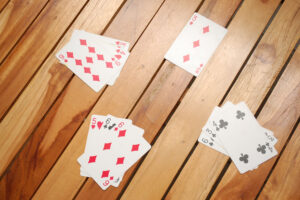 To start play, you have to figure out who deals first. After you pick a dealer, the cards are dealt one at a time until everyone has the appropriate number of cards for the hand you’re playing. The first card left over after dealing is turned face up and presented as the “trump suit” for the hand. The trump suit (naturally) trumps any of the other suits played in any hand. Traditionally, the remaining undealt cards are placed in a face down stack with the turned trump card on top of it, as a reminder.

Bidding starts with the player to the left of the dealer, then continues clockwise, back around to the dealer (who bids last each hand).

Players “bid” by shouting out the number of tricks they will try to win. There’s no passing in Oh Hell — but you can bid zero. If you bid “low” (zero), you must take NO tricks.

Game play begins with the player to the dealer’s left, who leads the first card. The lead may be a trump card or a card of any suit.

Play moves clockwise. Each player must follow the suit led, if possible. If not, the player can play anything else. The player who has played the highest trump card, or the highest card of the suit led, wins the trick. That player then “leads” the next trick. Continue play until all tricks have been played and won.

In the most traditional version of Oh hell, a player who wins the exact number of tricks that he bid earns 10 points plus the number of tricks bid. Players who take more or fewer tricks than they bid score nothing. No penalty — but no bonus either.

My grandmother taught me a version of Oh Hell (known colloquially as Satan’s Bridge) in which the hand size increases and then decreases. The fun part is at the end — on the final single card hand, the players must each hold their card on their forehead, so that everyone can see their opponents cards but not their own. Bidding stays the same — this rule captures the spirit of the original name — Oh Hell — because that’s what most people will be saying during bidding.

There are also plenty of scoring variations to consider when playing a game of Oh Hell.

Some “house rules” don’t give zero bidders the full ten point value of a successful bid, preferring instead to award a “low” bid just five points. Another way to play, and a way I think is more fair to the low bidder, is to award five points for a successful low bid as well as one point for each trick that was played — this rewards a successful low bid rather than punishing it. Going “low” is hard, and should be rewarded equally in my opinion.

Still other games of Oh Hell try to name a single winner per round — this winner is the player with the highest score when the whole series of hands has been played. This gives the game a “long term” strategy feel that many players of Whist and Bridge like.

No matter how you play it, and no matter what you call it, Oh Hell is a fun variation on bidding games, and a good primer for people learning to play Bridge.